Written by Alex Lv
Updated over a week ago

A technique called WebGL (Web-based Graphics Library) allows 3D pictures to be rendered in browsers. Typically, WebGL fingerprint is used on websites where, for example, it is possible to work with 3D shapes. However, the technology can also be used to identify the user. Websites can typically do this using one of two methods:

The Web GL test page by Browserleaks allows you to test WebGL and see what data the websites can retrieve using this API.

What is Web GL Metadata and Image Modes in GoLogin

Any web browser transmits a huge amount of metadata: what maximum size a drawn shape can take, the maximum number of polygons, how many bit colors are supported, and other necessary information that websites use to render shapes. This very technology can also be secretly used to collect data about devices that are responsible for graphics on your PC.

In Gologin, you may choose to let the website see the actual fingerprint of your device or add permanent random noise to the readout to regulate WebGL readouts.

WebGL Image is that very 3D image that is rendered. The WebGL fingerprinting is similar to Canvas: the website renders a shape, gets an identifier, and then compares it with other Internet users. Usually the pyramid is rendered, colored in a gradient, because it covers enough points — it has both height and depth, and width and length.

Noise — WebGL Image will be masked by applying a unique and persistent noise. There's no confirmed information about web sites actually utilizing this parameter for browser fingerprinting.

This enables the creation of a distinctive fingerprint that endures for a certain browser profile.

Off — renders according to the data that is in the metada (see WebGL Metadata). Don't mask WebGL Image. There's no confirmed information about web sites actually utilizing this parameter for browser fingerprinting. 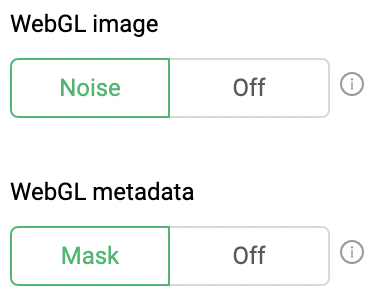 Mask — substitutes values based on the created digital fingerprint. Replace WebGL metadata with alternative suitable values. Recommended for most use cases.

In "Other WebGL parameters," you can view modified WebGL metadata parameters:

Off — transfers the real values of your PC. Don't mask WebGL Metadata. Websites will see real WebGL parameters of your computer. There is no solid proof that websites actively use the WebGL option to identify users' browsers.

In some circumstances, where websites react poorly to 100% unique WebGL readouts, switching the option to Off can be useful.

WebGL Renderer — the user's video card, with the help of which the video is rendered (for example, GTX 1080).

Still not clear? Watch this video:

Did this answer your question?